Chris Brann: Fighting to B 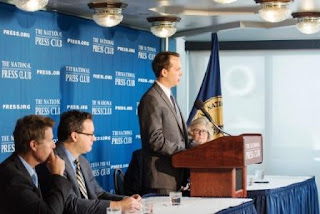 By Noel St. John
Left behind parent Dr. Chris Brann pleads for his son’s return from Brazil following an abduction across international borders by the child’s mother at a Newsmakers press conference, November 7, 2015.

Anthony Gallo of the Newsmakers Committee introduced the panel of speakers starting with Chris Brann and told of the pending Newsmaker’s heart-rending nature.  He next introduced David Goldman father of Sean who was illegally taken to Brazil by his mother.  Ambassador Michele T. Bond and Dr. Brann’s attorney, human rights lawyer Jared Genser filled the head table as U.S. Congressman Chris Smith from New Jersey who passed legislation to fight kidnapping joined later.

Chris Brann began his story with the 2013 abduction of his son from Texas to Brazil.  After meeting his future wife, Marcelle, while attending graduate school in Houston, they married in 2008 and their son Nico was born in 2009.  As their marriage was failing, Marcelle planned a nominal vacation to attend a relative’s wedding.  Dr. Brann admitted his fears that Nico would not return and actively sought to insure against the possibility of abduction.  Despite his circumspection, Marcelle enacted a premeditated plan to prevent Nico’s return to his father.

Becoming emotional as he further told of his son’s removal, Brann also described how Marcelle’s parents were actively involved in preventing Nico’s return to the U.S.  Brann claimed that a school owned by his former in-laws was used to manufacture fraudulent documents used to further his son’s stay in Brazil.

Jared Genser a human rights attorney representing Chris Brann took his turn at the podium charging that Brazilian Federal Judge Arali Maciel Duarte is guilty of malpractice and negligent in using a law designed to prevent child abduction across international borders as justification for keeping Nico in Brazil with his mother.  Genser continued with a description of the legal framework upon which his case is based.

Ambassador Michele T. Bond an assistant secretary with the U.S. Department of State next spoke stating how the State Department places the highest priority on U.S. citizens traveling abroad but especially children, as they cannot adequately speak for themselves and are dependent upon the actions of adults.  Ambassador Bond cited the work her bureau does with cases of IPCA or International Parental Child Abduction and said her bureau, working with law enforcement, has on several occasions prevented parental child abductions as they were happening.   Bond described additional tools parents have that can prevent abductions including passport issuance restrictions and the use of demarches or official protests to the offending country by the state department.

The late arriving congressman next spoke stating, “Every year, an estimated 1000 american children are unlawfully  removed from their homes by one of their parents and taken across international borders.” Congressman Smith further declared that child abduction is child abuse.  Representative Smith introduced David Goldman, father of Sean Goldman in whose name legislation was enacted to prevent cases of parental abduction.

As Mr. Goldman relives his ordeal in the description he gives, he struggles to maintain control of his emotional response.  He described how the act bearing his name was designed to give the necessary tools to the government to pressure non-compliant countries into following the Hague Convention addressing child abduction.  He also stated that Brazil his defied this act nine times.  At the conclusion of his remarks, he apologized for his emotions and embraced Chris Brann in support.